Skip to navigation Skip to content
Skip to Sub-menu

The College of Human Environmental Sciences is honored to announce that Drs. Tahira and Labh Hira, both MU alumni, made a substantial estate commitment to benefit the Department of Personal Financial Planning. Their generous gift will establish the Tahira and Labh Hira Endowment to support faculty and student success in the field of financial planning.

“This historic gift reflects the Hira’s deep belief in our Department’s ability to be a leader in financial planning education and research,” said Dr. Fran Lawrence, department chair of Personal Financial Planning. “We are extremely grateful for their support over the years and for making another important investment.” Tahira and Labh, both leaders in their fields, met as graduate students at Mizzou in Agricultural Economics in the 1970s. Tahira earned an MS in Agricultural Economics (1973) and continued for a Ph.D. (1976), initially pursuing a minor in what was then the Department of Family Economics and Management (later, Personal Financial Planning). “I thought family finance would be a good elective, because farm families also have finance issues. It’s not just farm businesses,” Tahira said. 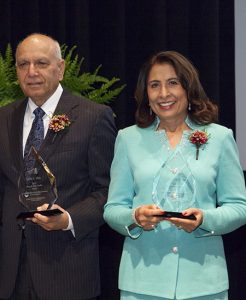 Soon, that minor field turned into a major, however, and Tahira transferred to the Ph.D. program in Family and Consumer Economics. “There was an attraction on both sides,” she said. “The department wanted me to move in, and I also appreciated the opportunity to do direct work with individuals and families.”

Her experiences in the college laid the foundation for an international career as an expert in financial counseling. Tahira and Labh spent the majority of their careers at Iowa State University, where Tahira took the lead in developing a family finance program. “They brought me to teach a course, but that’s not where we stopped,” she said. From that one course, Tahira developed an undergraduate degree program in Family Financial Counseling and Planning, and built a Financial Counseling Clinic – one of the first in the nation.

Dr. Deanna Sharpe, Associate Professor in Personal Financial Planning at Mizzou, was a graduate student in Family Resource Management at Iowa State during this time and took classes with Tahira. “Married just a few years, I decided her personal finance course would be beneficial. It was, but also beneficial were our conversations about family, life, research, and career,” Deanna said. “Although personal finance professionals typically do not advocate being in debt, we are glad for the debt we owe to Dr. Hira for all that she has contributed to establish standards of excellence in the personal financial planning profession.”

In true HES fashion, Tahira has actively used her expertise in extension work beyond the university. “My desire has always been to pull in as many people as possible to learn and do better,” she said. “Take your research and make it practical and applicable.” She has advised a wide variety of businesses and organizations both at home and abroad. In Japan, she has done so much work, that they call her the “Mother of Financial Counseling” there. Her expertise in personal finance also led to her appointment to the U.S. President’s Advisory Council on Financial Literacy under George W. Bush.

As active contributors to their fields at Iowa State and beyond, Tahira and Labh were encouraged by their peers to serve in leadership roles at the institution. Labh served as dean of the College of Business for 11 years and led a period of financial and academic growth, which included the creation of a new Ph.D. program in business and technology. Tahira held several administrative roles, including Associate Vice Provost for ISU Extension and Executive Assistant (chief of staff) to the President of Iowa State University. She also played a major role in the establishment of the Association of Financial Counseling and Planning (the major international professional organization for the field), which was born at Iowa State, serving as its founding president in 1986.

“Tahira and Labh have both had truly exemplary careers,” said Dr. Sandy Rikoon, former Dean of the College of Human Environmental Sciences. “We are so appreciative that they have chosen to recognize and support Mizzou’s Department of Personal Financial Planning. Their gift will really help us to remain one of the Top Five programs in the United States.”

The Hiras have been long-time supporters of Mizzou, donating not only to HES but also to Agricultural Economics and to the School of Nursing, and they believe firmly in the value of their investment. Tahira emphasizes: “We believe in education. We are a product of education. Education is what made this country what it is today.”